With all the hype over cryptocurrencies and Dogecoin, it may be easy to overlook some of the best investments in the stock market. Now, tech stocks are a lot cheaper than they were a few months ago, but not everything on sale is a good deal. Considering that the pandemic has triggered an increase in time spent online, companies are readjusting their marketing strategies. Whether it is the general public, businesses, or even the government, almost everyone has a social media presence. These reasons are enough to trigger interest in social media stocks.

No matter how you slice it, we can’t ignore the fact that social media has become so intertwined in our daily lives. Just as we saw this shift among consumers, businesses also began to leverage social media to make a presence in the online channel. Advertising revenue has been the key revenue driver for social media companies. So, with those shifts in traffic and marketing budgets, top social media stocks are poised to benefit.

Snapchat (NYSE: SNAP) kicked off the first-quarter earnings season Thursday by topping Wall Street’s estimates. Expectations were certainly high for the social media stock after wrapping up 2020 with staggering momentum. From the first-quarter results, Snap’s revenue came in 66% higher from a year earlier to $769.6 million. The quarterly results were certainly encouraging for the sector. Naturally, investors will also be looking for top social media stocks to buy, hoping that the tailwinds generated from the pandemic will benefit social media companies as a whole. With all that in mind, here are four quality social media stocks that are worth watching in the stock market today.

First up, Pinterest is an image-sharing and social media company. Its platform allows users to search for and save information on easy-to-access digital ‘pinboards’. At the end of fourth-quarter 2020, Pinterest reported 459 million global monthly active users on its platform vs. 449.4 million expected in a FactSet survey. Some might say the company is set up for sustainable monetization. That’s because Pinterest is more visual and search-based, making advertisements easier and less intrusive for users. 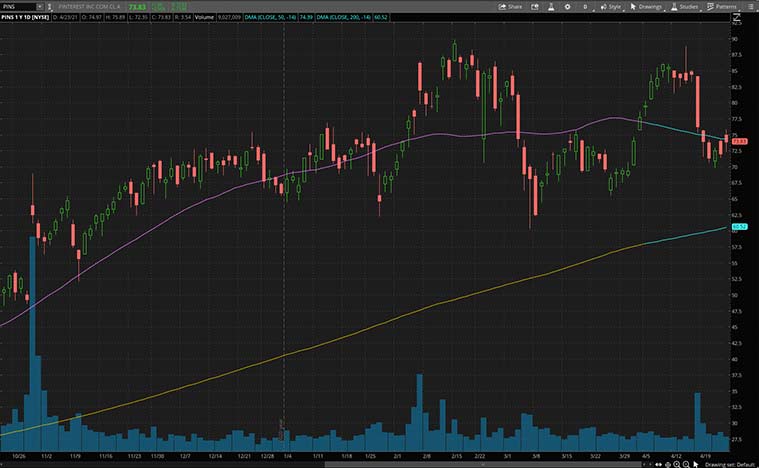 Besides its first-mover’s advantage in a niche area, Pinterest has not faced the same publicity issues that affect the likes of Facebook and Twitter. On April 21, Pinterest announced that it is expanding its partnership with Shopify (NYSE: SHOP) to 27 new countries, including Brazil, France, Germany, and the UK. In detail, the partnership will allow over 1.7 million Shopify merchants to bring their products to Pinterest easily. With such an exciting development, Pinterest could remain an attractive social media stock to invest in. While PINS stock may still be attractive at current valuation, can it replicate its gains in 2020?

[Read More] 4 Renewable Energy Stocks To Watch Before May

Coming up next is Facebook. The social media goliath is no doubt a household name at this point. This is clear as its platform continues to help billions of people worldwide stay connected with friends and family. As one of the leading social media players on the market, FB stock has been in the limelight over the past year. Even at this time, FB stock price continues to march higher. It is currently trading near all-time highs as a substantial percentage of the global population uses its platform on a daily basis. 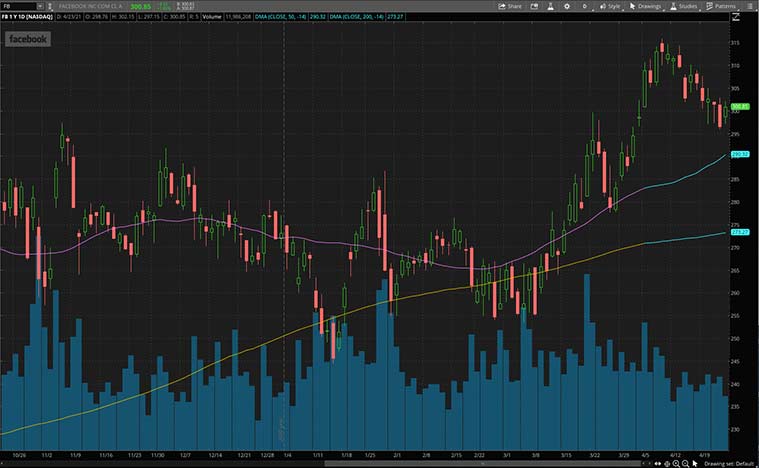 Despite struggles in early 2020 amid the pandemic, total revenue came in 22% higher to $86 billion year-over-year in its latest quarter. Most of the growth was a result of a 21% increase in ad revenue. Meanwhile, “other revenue” increased by 72%. This primarily came from VR-related revenue.

Moving forward, the company cited growing e-commerce trends and shifting consumer demands as key drivers for its current momentum. Accordingly, these provided a tailwind for Facebook’s advertising and marketplace business. Considering all these, do you think FB stock can maintain its momentum ahead of its earnings release on April 28?

Twitter is a microblogging and social networking service. Basically, its software service allows people to connect and communicate via messages known as ‘tweets’. The company has been on the news lately after announcing it’s in the process of making it easier for businesses and those who use the platform for work to better promote their brand and business information. But the bigger news for the company is the potential acquisition of Clubhouse, a live drop-in audio networking platform, for around $4 billion. The talks are said to have stalled for now. Twitter is expected to report earnings on April 29. 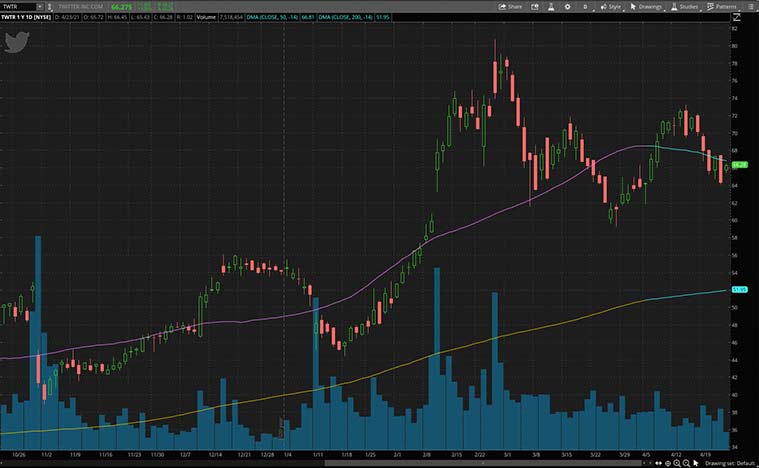 In its latest quarterly report, revenue came in 28% higher year-over-year to $1.29 billion, beating Wall Street’s estimates. It was a strong quarter for digital advertising companies in general. They were buoyed by the push toward online shopping during the pandemic.

As Twitter continues to engage users on the platform, there could also be more room for content creators to generate income from the site. It will be important to continue to watch how Twitter innovates and whether these tools become more widely available to users. Thus, would you be adding TWTR stock to your watchlist?

[Read More] Top Cyclical Stocks Worth Investing In? 4 To Consider

Last but not least, we have Match Group. The company owns and operates the largest global portfolio of online dating services. For the most part, you could say that the pandemic has turned the dating scene on its head. From social distancing measures to lockdowns across the globe, you’d think that dating has become virtually impossible. Well, through Match Group, countless people have started to meet up, virtually. So much so, that its flagship Tinder app raked in total revenue of $1.4 billion throughout 2020. 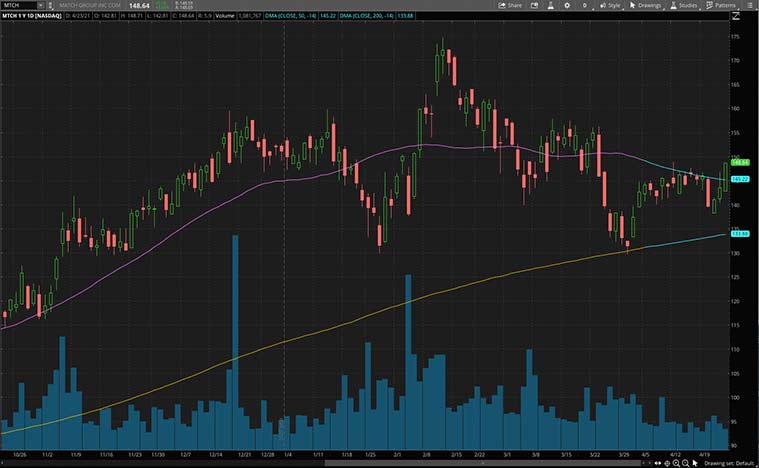 Recently, the company received an upgrade to “Buy” rating with a price target of $175 from BTIG analyst Jake Fuller. This implies around 22% potential upside from its current valuation. Some of this optimism may have to do with their recent acquisition of Hyperconnect. The South Korean tech company operates two of the more profitable online dating apps in the country.

More impressively, these apps are profitable and saw a 50% growth in revenue for 2020.  I could see the company providing deeper and more interactive experiences for its users through this. With this in mind, will you be investing in MTCH stock?